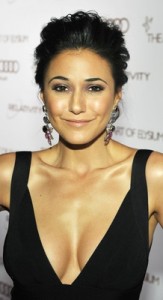 We can’t deny that Emmanuelle Chriqui is one of the hottest celebrities in the industry. This Canadian chic knows exactly how to catch an attention whether she’s on or off the red carpet.

The Saint John of Las Vegas actress is a fan of varieties of hairstyles and one of these is the hairstyle she wore at a certain Hollywood glam — her regally beautiful formal updo that is styled in beautiful twists. To be honest, we can’t get enough of this hairdo. It’s one of the fabulous hairstyles we’ve seen in the red carpet.

She has a great sense of fashion. In fact, she doesn’t need a stylist herself. She knows which dresses better suit her slender frame. And for her shoes, she’s mostly spotted wearing pumps, wedges, and strappy sandals.

During her interview with Allure, she said, “I’m an eyes girl. I love lashes and eyeliner.”

Emmanuelle Sophie Anne Chriqui is a Canadian film and TV actress. She was born on December 10, 1977 in Montreal, Quebec, Canada. She is popular for her role appearances in a number of films that include Harrison Bergeron, Alien Abduction: Incident in Lake County, Detroit Rock City, The Crow: Wicked Prayer, National Lampoon’s Adam & Eve, You Don’t Mess with the Zohan, Women in Trouble, Saint John of Las Vegas, Taking Chances, and Fort Bliss. Height: 5’3

"Don't gain the world and lose your soul, wisdom is better than silver or gold." - Bob Marley